Talking about prunes versus dried plums is a lot like the song “Let’s Call the Whole Thing Off” – think “tomato” versus “tomahto” – it’s the same idea just a different way to say it. Whether eating a prune or dried plum, you are still consuming the same nutritious, sweet, long shelf life, multifunctional fruit.

John Taylor, who owns Taylor Brothers Farms with his brother Richard, refers to the fruit as a prune. He should know as his farms produces 1,200 to 1,800 tons of the popular dried fruit per year on more than 1,000 acres in Sutter County, Calif. He also knows that all prunes can be plums, but not all plums can be prunes. Some plums do not hold their form and melt in the drying process. The perfect prune comes from the La Petite D’Agen plum variety, which was developed more than 100 years ago. At maturity, it has a royal purple outer skin and amber colored flesh. What’s also unique about this variety is that the whole fruit can be dried without fermenting.

Prunes, known for their high levels of sorbitol (laxative effect), are also incredibly nutrient dense with high levels of vitamins and minerals and have shown an ability to help increase bone density. Taylor notes that health-conscious millennials are eating more prunes and understanding, “It’s not what your grandmother gave you.”

The fourth-generation farmer takes pride when people ask, “Why do your prunes taste so good?” He attributes the question’s answer to organic farming practices and harvesting at the perfect time. 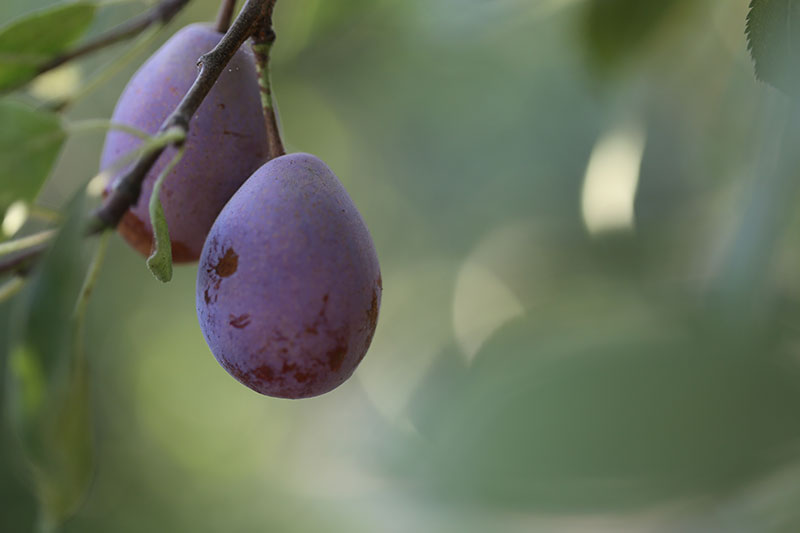 Prunes are picked in mid-August and the process takes between 20 and 25 days. That’s when the fruit’s Brix level, an estimate of the sugar or water-soluble content, is at the premium number of 24. “It’s a good amount of sweetness,” Taylor said. “If the level is low, say 20 Brix, it will be too soft and dry. By the end of the harvest, it can get up to 30 Brix.”

Once picked from the orchard, prunes are then dried to adopt their more familiar shape. It takes 16 to 18 hours to dry a stack (2,000 pounds of prunes in trays) in a 185-degree tunnel oven. “The air is circulated with big airplane blades to move the warm air all around the stacks of prunes. This takes the moisture away,” Taylor explained. After oven drying, prunes are placed in barns to continue the process of drying out in common storage. They are then sorted and pitted by machine and ready to be boxed, sealed and shipped.

Taylor began organic farming due to an unfortunate incident in the late ’80s. At that time, Taylor was growing apples as well as prunes. Renters in a house near the apple orchard claimed that pesticide spray drift had contaminated their house. After Sutter county officials determined the claim was false, and the renters abruptly abandoned the house, Taylor began thinking about the use of spray and fertilizers on his farm. He also started reconsidering his crops. “I got to thinking that prunes are a durable crop and they don’t need a lot of sprays. I also thought it was a hearty fruit. So, I decided to give it a try and began with 15 acres using organic farming practices,” Taylor recalled. From there, he has continued using organic farming techniques on more and more acres and began planting prune orchards in earnest.

His organic practices include planting cover crops after harvesting to recondition the soil and help it breathe. “I plant legumes, mustard and winter peas. This balances the nutrients held in the top six inches of the soil,” Taylor said. During the winter months, he also sprays the orchard with refined petroleum oil that helps control insects. “The oil smoothers the insect. And, it’s not detrimental to man or animal,” Taylor explained. He also fertilizes his orchards in the fall with pelleted chicken manure.

And what effect do these farming and harvesting practices have on the prune’s taste? Taylor describes the luxurious mouth-feel of a prune, “The skin is durable, but not tough. And the meat melts in your mouth. It’s sweet, but not too sweet,” he said. “And, the flavor stays with you like a hearty wine.” His favorite time to eat prunes is after dinner when he wants a sweet treat. “It’s my dessert. I eat just three or four and I’m satisfied.” He also likes his wife’s prune cake for its sweet and moist texture.

Taylor comes from a long line of farmers, although it was never his dream to follow in his dad’s footsteps. Taylor’s grandfather began growing cling peaches in Sutter county. After World War II, his father returned home and joined the family farming business. However, the flood of 1955 wiped out their fields and they rebuilt the farms with diversified crops that included cherries, plums, peaches, and cattle. “My dad loved to rodeo. He was a cowboy fruit farmer,” Taylor remembers. Taylor wanted a forestry college education. However, during the summer and breaks, he would help on both his dad’s farm, as well as Richard’s farm. Finally, he and Richard leased their dad’s land and went into business together. Thirty-eight years ago, they began Taylor Brothers Farms and the family business has been growing ever since.

Back to Current Articles