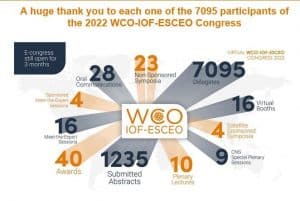 Dr. Mary Jane De Souza, Pennsylvania State University, presented results from the randomized controlled trial on postmenopausal women during the March 24-26 virtual meeting of the world’s leading conference on bone, joint, and muscle health, WCO-IOF-ESCEO.  “Prunes Preserve Hip Bone Mineral Density and Frax Risk in A 12-Month Randomized Controlled Trial in Postmenopausal Women; The Prune Study,” was selected for an oral presentation from more than 1,200 abstracts submitted. This was the first time that Dr. De Souza shared results from the clinical trial with the scientific community.

The study evaluated the effects of two doses of prunes (50g and 100g/day) on bone mineral density (BMD) in postmenopausal women during a 12-month intervention. The 50g Prune group preserved hip BMD at 6 and 12 months while total hip BMD decreased in the Control group at those same time points compared to baseline.  Hip fracture risk (FRAX) worsened in the Control group at 6 months, but the FRAX score was maintained in the pooled (50g+100g) Prune groups.

The study was unique in that it was a large, randomized control trial involving 235 women and evaluated 2 different doses of prunes thus adding confidence to the efficacy of a smaller dose.  In addition, this study was the first to demonstrate an effect on BMD at the hip – the site of most concern for PM women as it often leads to hospitalization and diminished quality of life – and the first study to provide information on fracture risk, which did not increase for women in the Prune group.

The collaborating investigators continue to analyze data for future publications and presentations.  Abstracts on the inflammatory component of the clinical trial will be presented at Experimental Biology and the American Society for Nutrition in April and June respectively. A press release announced findings to global audiences as the news is highly relevant for a consumer audience with a demographic of women over 50.  Additional communication plans are being developed to support the industry’s long-term investment in the largest clinical trial to date.

Note: below are the acronyms for the different organizations, the full title of Dr. De Souza, and a listing and affiliation of all the collaborators so the industry can see the scope of expertise involved.

To raise awareness in the United Arab Emirates (UAE) market, California Prunes hit the ground running in Dubai this winter as in-person events took hold at Gulfood 2022, EXPO, and an Agribusiness trade mission.  A slew of events unfolded at Gulfood 2022 making this year’s show a very dynamic event with attendees from a wide range of international regions and the first truly international trade show since the start of the pandemic. The exhibition attracted high-level trade contacts from the Gulf Cooperation Council (GCC), Middle East, South Asia, Europe, and the United Kingdom.

Visitor numbers to the CPB stand were significantly increased compared to previous years and over 4,200 sample packs were distributed throughout the show. Additionally, CPB sponsored the INC cocktail evening, worked alongside California Walnuts, Chef Art Smith, Secretary Ross, and Administrator Whitley in a cooking demonstration, and were featured as a hero ingredient on California Day at the influencer lunch. In addition, California Prunes were showcased at the Fork and the Road Extravaganza, in promotional activity for Al Maya and Lulu retail stores, Expo 2020, and Agribusiness Trade Mission Dubai 2022.

The activations at Gulfood surpassed goals set for the program and put prunes in front of attendees at various levels. Over 150 trade leads have been generated from participation at the show. 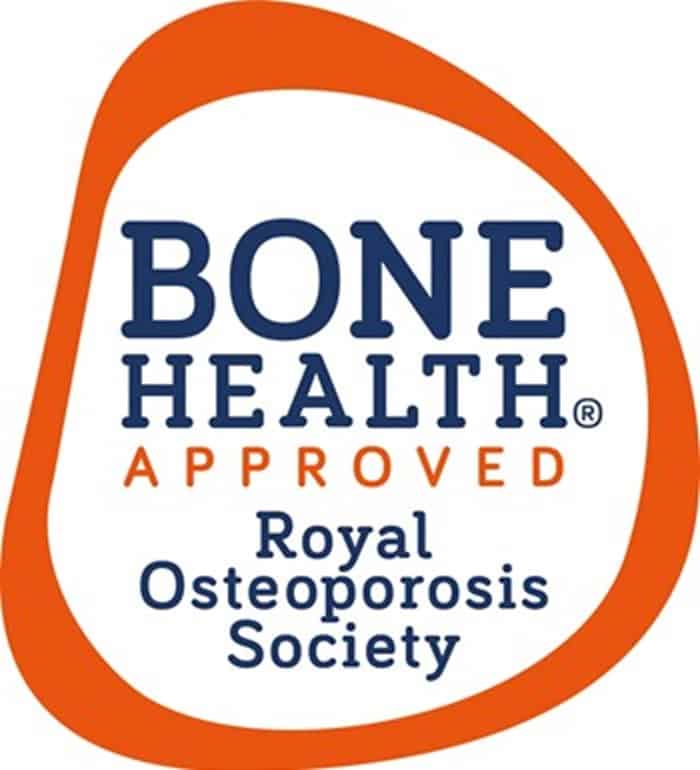 We are proud to announce that California Prunes has received ‘Bone Health Approved’ status from the Royal Osteoporosis Society in the UK. In becoming an approved partner with this esteemed charity organization based in England, the ‘Bone Health Approved’ logo enables consumers to easily identify food and drink, supplements and living aid choices that contribute to better bone health.

For more information, please see the announcement on the Royal Osteoporosis Society website.

The California Prune Board is deeply committed to the advancement of bone-focused nutrition research and will continue to partner with renowned research and academic institutions to explore the effects that prunes have on bone health.

Eight ads have been developed and published across top trade 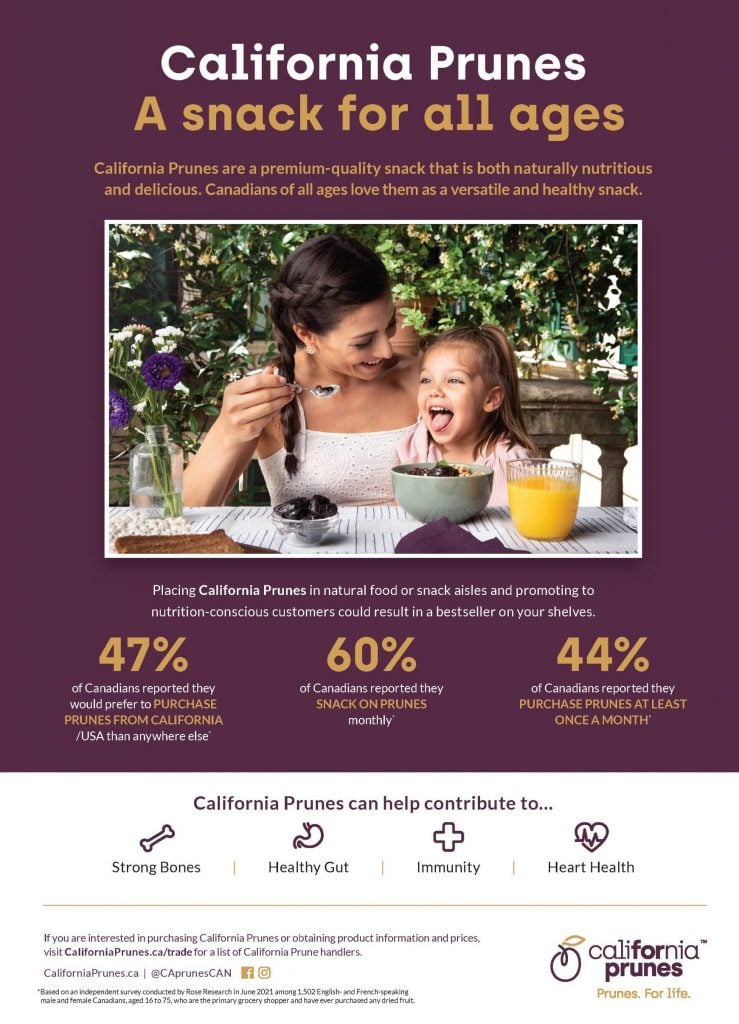 publications in Canada, including Grocery Business, Canadian Grocer, and Western Grocer. Trade advertising contributes to raising awareness of how California Prunes can add value to trade business through quality, taste, and health advantages. Activities have achieved or surpassed the program goals of securing a minimum of eight ads (print or digital) with 450,000 impressions.

To reach consumers with deliberate, curated campaign messages, credible influencers and subject matter experts were considered for appearing on popular television shows for sponsored segments. During this reporting period, four spokespeople appeared in four TV segments, which contributed to the overall goal of six TV segments and 3,000,000 impressions.

Today’s consumers are more likely to try a product, recipe, or idea if it comes from someone they trust and influencers are the next generation of “word of mouth” advertising. For the second year of dedicated programming towards influencers, the domestic marketing team is consistently sharing content and engaging creators who influence big brands and other influencers, to think about new ways to use prunes. 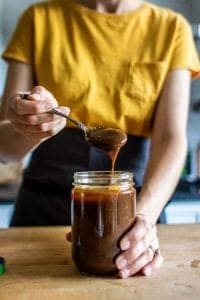 The winter program featured a digital Livestream bake-along program and several podcast sponsorships with Cherry Bombe, an influential media entity that celebrates women in and around the world of food and drink. The digital team worked directly with the content team to create a “heritage” Fruitcake during their Friendsgiving campaign. As part of the partnership with Cherry Bombe, a full-page ad featured the flavorful and nutritional benefits of California Prunes using prune puree and ingredient swaps for baking. 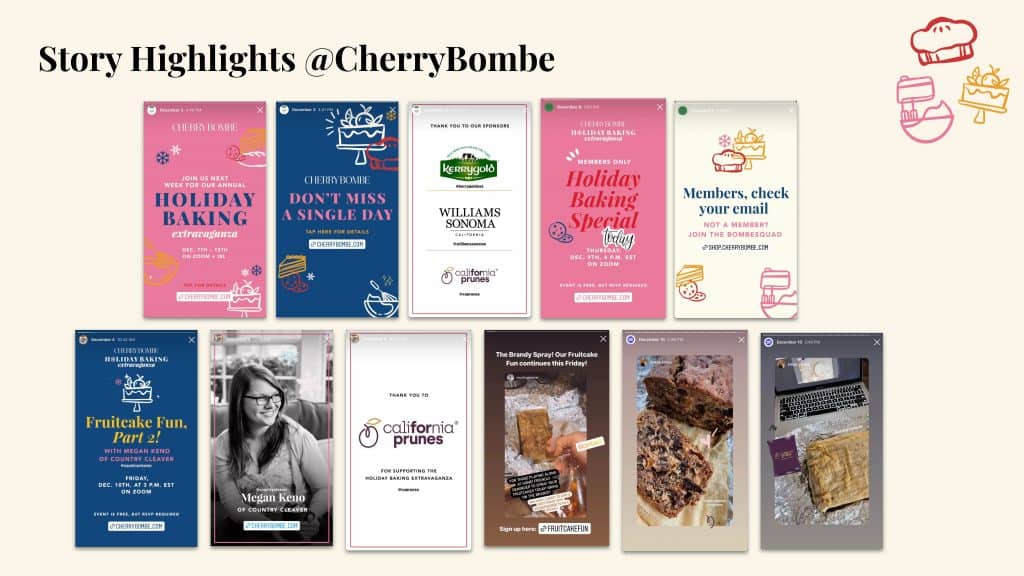 While all of the content in the influencer programming 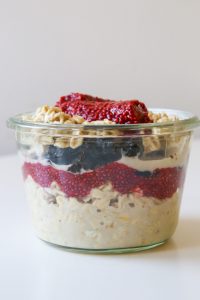 The second phase of this campaign will include expanded nutrition/RD talent, influencer content featuring recipes suitable for Spring + Summer, as well as a recipe contest with key influencers to encourage consumer participation.

Prunes in the News

Stay up to date with Prunes in the News!