The higher the yield per acre early in the life of an orchard, the sooner the orchard covers development costs and returns a net profit to the grower. Yield per acre in young prune plantings is determined by 1) yield per tree and 2) trees per acre. In this article, we will focus on practices that increase yield per tree in young prune trees. With new, well-anchored prune rootstocks now in the market, especially Krymsk 86 and Viking, it is worth reviewing young orchard pruning trial data. 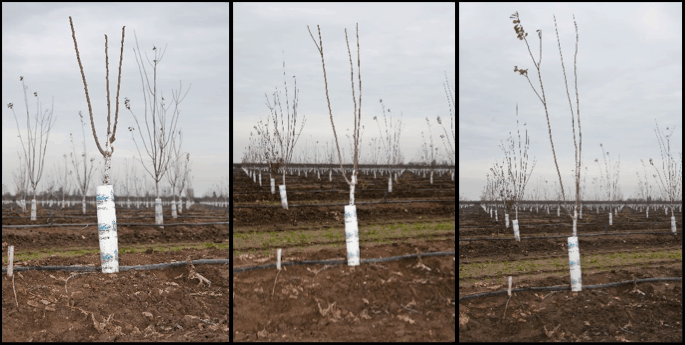 Eliminating severe heading cuts during tree training increases early production. UC research has shown that early yields can be improved in prunes, almonds and walnuts by reducing the severity of pruning during tree establishment. This has been done by reducing or eliminating the use of severe heading cuts during tree establishment. In pruning, “heading cuts” reduce the length of a limb, while “thinning cuts” completely remove the limb. Historical orchard tree training included severe heading cuts (“short pruning”), where half or more of the previous year’s growth was removed during the dormant season. However, making less severe cuts or leaving limbs unheaded can lead to earlier and greater production.

Early prune yields are maximized when pruning is minimized. Pruning works against the objective of early fruit production since it removes the one-year-old wood on which flowers are born and reduces tree size. Bill Krueger (UCCE farm advisor emeritus) and others have tested several pruning regimes for newly planted prune trees (Figures 1-3). In the short-pruned treatment, the previous year’s growth (primary scaffold after first year, secondary scaffold after second year, etc.) was severely headed back to leave only the first 30 inches of the scaffold after the first through the fourth leaf. With the intermediate pruning treatment, each season’s scaffold growth was lightly tipped back 6 to 12 inches. For long-pruned trees, the scaffolds were left unheaded each year and only thinning cuts were made to completely remove branches during training.

The short-pruned trees had lower yields than the long-pruned trees each year, and the lowest cumulative yield through the fifth leaf (4,214 dry lbs/ac, table 1). Intermediate, “lightly tipped” trees had intermediate yields (7,065 lbs). Long pruning (unheaded), had the greatest cumulative yield (10,153 lbs). By the sixth leaf, no yield differences were measured within a given year.

*Values followed by different letters are significantly different at the 5% level.

Although the short-pruned treatment has lower early fruit production, some feel this style provides more control over tree structure, reduces the risk of blow-over, and may develop a stiffer structure that is less prone to breakage. Conversely, the greater canopy growth and fruit production with the long-pruned (unheaded) style may require a greater level of management, including spring tying (as early as second leaf) to avoid breakage. Because of the risk of limb breakage, you could consider mitigating your risk by trying out long pruning on a few acres and more conservatively pruning the rest of the orchard. The intermediate lightly-tipped option can be a good compromise because management is easier if the potentially fruitful primary scaffold tips are removed (if the branch tips crop, they could pull the branches out of position).

There are, of course, variations on your own interpretation of intermediate pruning, based on the growth of your primary scaffolds. For instance, if you had 7 feet of growth and you cut the scaffolds back to 4-5 feet, that could still be considered an intermediate option. In research from the 1980s, the greatest early yield reduction occurred when primary scaffolds were headed to 3 feet or less in the first dormant season compared to leaving 4 feet or longer scaffold lengths. Pruning requires careful consideration and there is no universal recipe; each orchard should be treated uniquely.

Whichever training style you choose, strongly consider immediately protecting pruning wounds to avoid a fungal canker infection that could debilitate your trees before they can get a good start. For more, see the article on Cytospora infections in this newsletter.

You can learn more about these three training styles on pages 137-141 of the 2012 Prune Production Manual (Publication Number: 3507, anrcatalog.ucanr.edu/Details.aspx?itemNo=3507).